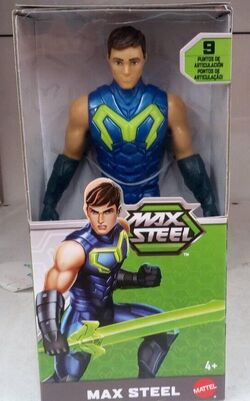 Max Steel is one of the character's action figures. It was released in 2018 and doesn't belongs to any subline.

Max wears a sleveless dark blue armor with the light green M-shaped logo on his chest, black forearm pads and black boots. He has nine points of articulation and comes with a green sword.

Retrieved from "https://max-steel-reboot.fandom.com/wiki/Max_Steel_(6%22_inch_action_figure)?oldid=29993"
Community content is available under CC-BY-SA unless otherwise noted.