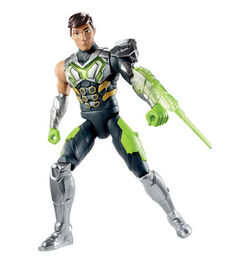 Max Steel is one of the character's action figures. It was released in 2018 and belongs to the Connect-Tek subline.

Max wears a black, silver, yellow and green armor. His upper torso has silver armor with the light green M-shaped logo on his chest, yellow hexagons on his abdomen and yellow details on the sides of his torso. He wears silver forearm pads, silver gloves, green forearm thighs and silver boots. His left arm is covered by a black armor and grey shoulder pad. He has twelve points of articulation and comes with an acessory.

Max comes with a forearm pad with a blade that can be inserted into the Connect-Tek ports on his forearms.

Retrieved from "https://max-steel-reboot.fandom.com/wiki/Max_Steel_(18%22_inch_action_figure)?oldid=29998"
Community content is available under CC-BY-SA unless otherwise noted.