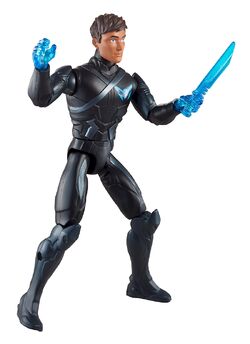 Max Ninja is an action figure based on the character with same name. It was released on 2016 on the first wave of action figures, and is a part of Connect-Tek.

"Dread is about to attack, but luckly Max is ready to fight with his Turbo Sword!"

On this figure, Max's face is fully seen, but unlike its processors, his face is larger since he is older. Max uses a black suit which has minimal paint job on the torso and legs, having a grey line on the chest and abdomen, and also a grey part on the thighs. He also have blue transparent hands, while one of them holds a small knife. Unlike its processors, Max doesn't have Steel on his chest, but instead, only a small logo written "MAX" on it. He has twelve points of articulation, and doesn't comes with any accessory.

Since he is from Connect-Tek line, other weapons from other toys can be attached to his ports, located on the back, forearms, and legs.

Retrieved from "https://max-steel-reboot.fandom.com/wiki/Max_Ninja?oldid=24782"
Community content is available under CC-BY-SA unless otherwise noted.