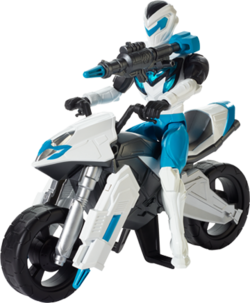 Max Motorcycle Attack (unofficial name) is a vehicle and figure based on Max Steel, and the Turbo Cycle. The set was released in 2015 in the second wave of action figures, and is a part of the Battle-Tek line.

This figure of Max Steel is based on Turbo Base Mode with some modifications to the sculpture, while the vehicle was based on Turbo Cycle, also featuring two launchers in each front side. The figure has twelve points of articulation, and comes with one accessory and projectile.

The motorcycle is able to launch two missiles through the launchers on its front part, and Max Steel has a small bazooka placed in his shoulder.

Retrieved from "https://max-steel-reboot.fandom.com/wiki/Max_Motorcycle_Attack?oldid=28951"
Community content is available under CC-BY-SA unless otherwise noted.