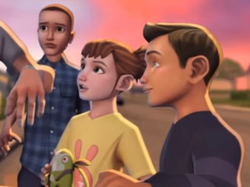 Max's Old Neighbors were a group of three unnamed childrens that lived on the previous city that Max lived. They debuted on Come Together Part One.

When Max was about to move to Copper Canyon, they appeared and one of them catched a picture of Jim and Molly, and asked if that man was Max. Max denied and later gave some of his toys to them, specifically a plush to the girl, and an action figure to the boy with the purple blouse.

They are a group consisting in three kids, two being a boy, and one being a girl.

Retrieved from "https://max-steel-reboot.fandom.com/wiki/Max%27s_Old_Neighbors?oldid=26473"
Community content is available under CC-BY-SA unless otherwise noted.