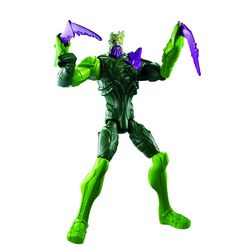 Mantis Extroyer (unofficial name) is one of Extroyer's action figures. It was released in 2016 and was introduced in the second wave of action figures. He is a part of the Connect-Tek subline.

Extroyer has a greenish skin tone, dark purple sharp teeths, a spheric green left eye, crystals protuding from the left side of his head and two preys on each side of his jaw. His armor is completely green and he has purple crystals on his left shoulder and chest and two claws protuding from each side of his mid torso and thighs. He has green shoulder pads with cracks and mantis-like claws for hands, both being purple. He has nine points of articulation and comes with one accessory.

He comes with a removable mantis claw capable of launching a projectile. Since he is a part of the Connect-Tek subline, he has ports on his body that allows him to hold accessories of other figures.

Retrieved from "https://max-steel-reboot.fandom.com/wiki/Mantis_Extroyer?oldid=28014"
Community content is available under CC-BY-SA unless otherwise noted.