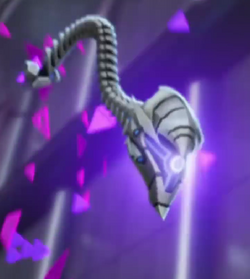 Makino Elite Ultralinks are a rare subspecies of Ultralinks featured by their loyalty to Makino and their highly agressive behavior. One of them appears for the first time in Ultralink Invasion Part One.

A squadron consisting of four Ultralinks were sent to Earth and one of them was a Makino Elite Ultralink, who later on would bond with crystals to create Prism Link, a recurrent enemy on the second season.

These Ultralinks are like royalty - capturing one is a big deal!

This variation is solely seen in the series. Prism Link is the only known orange variant.

They design differ a lot from other Ultralinks. Their head possesses similar traits of other Ultralinks and there is a long, segmented tail attached to their back (making them similar to snakes) with a spike on its tip.

Retrieved from "https://max-steel-reboot.fandom.com/wiki/Makino_Elite_Ultralinks?oldid=30091"
Community content is available under CC-BY-SA unless otherwise noted.