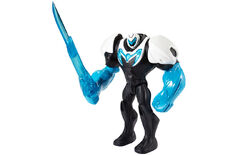 Lightning Strike Max is an action figure based on Max Steel in the Turbo Strength Mode. It was released in 2014 in the second wave of figures and is a part of Land Invasion line.

The figure, which is based on Turbo Strength Mode, is more bulky and bigger than other figures. Most of the armor is black with white details on it, and only the arms are blue. Also, this figure does not have the standard articulation (head, arms, elbow, hands, waist, legs, and knee), only have seven points of articulation (head, arms, elbow, and legs).

The figure comes with only one accessory, which is a Turbo Sword. Different of the previous Turbo Swords released, this one is a way better and can be expanded.

Retrieved from "https://max-steel-reboot.fandom.com/wiki/Lightning_Strike_Max?oldid=17985"
Community content is available under CC-BY-SA unless otherwise noted.