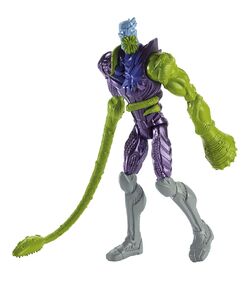 Leech Extroyer is one of Extroyer's action figures released in 2017. He is a part of both Connect-Tek and Turbo Missions sublines.

"Inspired by Max Steel and the new animated content, this deluxe 12-inch Leech Extroyer™ action figure raises combat play to the next level. Join the key Max Steel villain on blood-draining missions! Connect his appendages and attack, or devour an enemy’s entire head by stretching Leech’s mega arm mouth over it! His appendages attach via Connect-Tek ports, so they are interchangeable with other figures’ accessories for even more battle options and he features 18 points of articulation and new ominous decos. Recreate classic battles or wage new combat! Colors and decorations may vary."

Retrieved from "https://max-steel-reboot.fandom.com/wiki/Leech_Extroyer?oldid=29623"
Community content is available under CC-BY-SA unless otherwise noted.