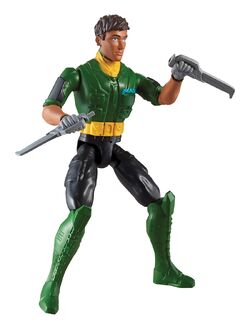 "With Max's agile reflexes, as well his impressive abilities with sword, it is hard to be defeated while he fights against Morphos and his claw attack!"

On this toy, Max's face is fully seen, and like other figures of 2016, he is older. Max uses a yellow blouse over a green jacket, a yellow belt on the waist, grey gloves, black pants, and green boots. Like other figures of the line, he is not using Steel, but instead, there is only the "MAX" logo. He has twelve points of articulation, and doesn't comes with any accessories.

He also have a gimmick consisting in uniting the knifies that he has on both hands to great a bigger one.

Retrieved from "https://max-steel-reboot.fandom.com/wiki/Jungle_Max?oldid=24790"
Community content is available under CC-BY-SA unless otherwise noted.