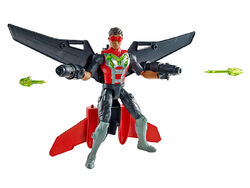 Jet Strike Max Steel is an action figure based on the character with the same name released in the first half of 2017. Though initially listed as a part of both Connect-Tek and Turbo Missions sublines, it became a part of the Turbo-Charged subline.

"Max Steel must be ready for extreme missions on land and in the air, and this techno sleek, transforming jet can whisk him at rocket speed into airborne battles. Connect-Tek ports enable over 15 different figure and jet configurations. Seat Max in the cockpit or position him atop the jet to pilot through the air while firing projectiles. With Max's new extreme adventure skills and next-level T.U.R.B.O. Energy, he is equipped to save the world from its most monstrous enemies!"

Retrieved from "https://max-steel-reboot.fandom.com/wiki/Jet_Strike_Max_Steel?oldid=29736"
Community content is available under CC-BY-SA unless otherwise noted.