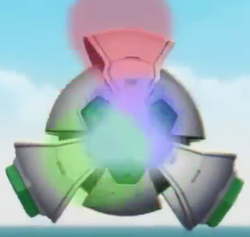 Hologram Projector is a a object created by Berto that had a important role in The Great Turbo Star Caper, which was also the episode of its debut.

When Steel scans something, it create realistic holograms (and also the voices of it) of determined objects or being, like Max Steel's Turbo Modes, or Maxwell's voice.

It is a sphere with medium size that has N-Tek's standard colors (green and white). The sphere also has three parts in its laterals that can close and open.

Retrieved from "https://max-steel-reboot.fandom.com/wiki/Hologram_Projector?oldid=23944"
Community content is available under CC-BY-SA unless otherwise noted.