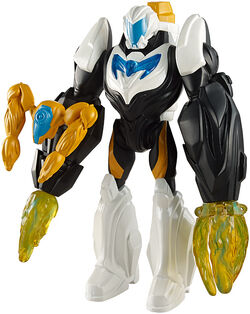 Heat Cyclone Max is an action figure based on Max Steel using the Turbo Heat Mode. It was released in 2014, and is a part of 6 Inch Line.

In this figure, Max Steel is using Turbo Heat Mode, featured by bulky appearence. The armor is mostly black with white details in the head, shoulders, torso, and boots, and yellow details in the legs and back. The figure has seven points of articulation, and comes with one accessory, and one projectile.

The accessory, is Steel using the Turbo Mimic Mode, which can be inserted into Max's cannons, and one projectile that can be launched by the left cannon. Also, the flames of the right cannon can spin if a button is pressed, doing movements similiar to a cyclone.

Retrieved from "https://max-steel-reboot.fandom.com/wiki/Heat_Cyclone_Max?oldid=19188"
Community content is available under CC-BY-SA unless otherwise noted.