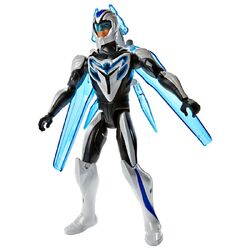 Flight Max is an action figure based on Max Steel using the Turbo Flight Mode. The figure was released on 2016, and is a part of Connect-Tek line.

"Elementor is ready to attack, but Max activate Turbo Flight Mode and triggers his rocket launcher to stop the storm!"

Max has a white helmet with blue and black details on it, and has a blue transparent visor that covers his eyes, while the rest of his face is shown. Most of his body is made on black plastic, but he has white paint job on the shoulders, torso, and legs. He comes with five accessories and has twelve points of articulation.

He comes with a backpack with blue paint job that has four Connect-Tek holes on it. The backpack can also launch a small projectile of Steel. He comes with a set of four wings that can be attached to the backpack to make the toy similar to the actual Turbo Flight Mode.

Retrieved from "https://max-steel-reboot.fandom.com/wiki/Flight_Max?oldid=24784"
Community content is available under CC-BY-SA unless otherwise noted.