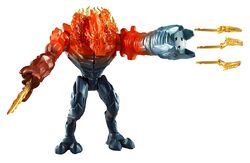 Firestorm Elementor is one of the Elementors' action figures. It was released in the first half of 2016 and belonged to the Team Turbo subline.

"When Elementor launches his tornado attack, Max transforms into a Turbo Mode and prepares to launch missiles!"

Elementor has an orange head with a rocky aspect, white eyes and a red orb on his forehead. His upper torso is orange and covered with yellow flames made out of yellow transparent plastic, while the rest of his torso, as well his legs, are dark blue. Both of his arms have a rocky aspect, with the left being half orange and brown while the rïght has a grey tornado with four rocks around it. He has five points of articulation and comes with three projectiles.

Elementor's tornado hand is able to spin and successively launch three yellow projectiles by pressing a orange sphere on his left arm. These projectiles can be also stored on his right arm and the same arm has a hidden blade.

Retrieved from "https://max-steel-reboot.fandom.com/wiki/Firestorm_Elementor?oldid=30982"
Community content is available under CC-BY-SA unless otherwise noted.