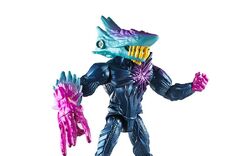 Extroyer Sharktopus, also referred as Ocean Mutant Extroyer is one of the character's action figures released in 2015. It was released in the first half of said year and belonged to the Connect-Tek subline.

Extroyer has a pale skin tone, white eyes, yellow teeth and the back of his head is larger than usual, having a deformed shape and rock-like aspect, also gaining a pink shading on the top of his head. He wears a dark blue armor, has many crystals incrusted on the left side of his chest and his left arm has a rocky aspect. The figure has ten points of articulation and comes with two accessories.

The figure comes with a shark with an articulated jaw, which is compatible with Extroyer's head or can be either inserted in the hex ports of his forearms. He also comes with a octopus, which fires a projectile.

Retrieved from "https://max-steel-reboot.fandom.com/wiki/Extroyer_Sharktopus?oldid=29893"
Community content is available under CC-BY-SA unless otherwise noted.