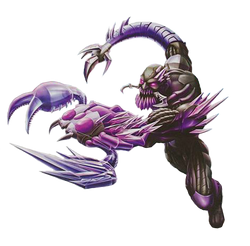 Extroyer Scorpion is one of Extroyer's Transformations. With this mode, Extroyer is able to clone himself by throwing spikes from his tail; the clones have also the same strength and durability of the original Extroyer. Extroyer Scorpion debuts in Lights, Camera, Max!.

When Extroyer had visions that Makino was coming to Earth, he searched and found an specific type of scorpion, that, with Extroyer's powers, would be able to clone himself. He later invaded an building and found the scorpion, and then extroyed him, creating his new transformation.

While Extroyer was asking suggestions to stop Makino from Vin and Dwayne, he later realized that there was an scorpion, that, improved with his abilities, would be able to defeat Makino creating clones of himself. Later, he invaded a building and extroyed the scorpion, and started to attack the film set of the Max Steel movie. Consequently, Max Steel appeared and they started to fight, Max using the Turbo Clone Mode, and Extroyer creating clones, but after Extroyer defeated all clones of Max, he couldn't make more, and was defeated by him. Later, Max had an idea and used the Turbo Strength Mode and then the Turbo Heat Mode to toughen Extroyer's tail, which made Extroyer unable to clone himself. Max later punched Extroyer and he ended on the ocean.

Retrieved from "https://max-steel-reboot.fandom.com/wiki/Extroyer_Scorpion?oldid=18782"
Community content is available under CC-BY-SA unless otherwise noted.