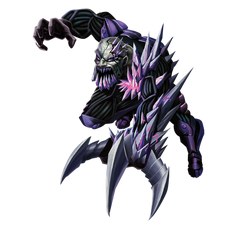 Extroyer Main Mode is one of the transformations of Extroyer. This is the real appearance of Extroyer and the primary mode of his. This makes Extroyer look very scary and he has purple spikes on his body. He has his own Ultralink bonded on his chest. He has a gray face that has spikes and also some crack, like if his head was a skull. His left arm is not like his right one, because this one bigger and longer than the other, and also allows him to morph, or Extroy into any animal or said beasts. He has an armored suit that he always uses and when he was Troy Winter, he had that suit and he was mutated into Extroyer. Extroyer Main Mode first appeared in The Thrill of the Hunt.

When Troy Winter betrayed Dredd and took the money and the Ultralink, he went to his house. Then there was a holographic message from Dredd, it said that if Troy Winter was watching it, that met that he had betrayed Miles Dredd, then Dredd made the explode on Troy Winter. Then that mutated him into Extroyer.

Retrieved from "https://max-steel-reboot.fandom.com/wiki/Extroyer_Main_Mode?oldid=18318"
Community content is available under CC-BY-SA unless otherwise noted.