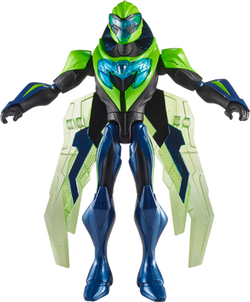 Explosive Wings Max (unofficial name) is an action figure based on Max Steel using Turbo Flight Mode. It was released in 2015 in the second wave of action figures, as a part of Transform-Tek line.

The figure represents Turbo Flight Mode, but with a different paint sculpture and paint job, the last being replaced to a greenish armor with dark blue parts. The figure has twelve points of articulation, and comes with two accessories and two missiles.

The figure comes with two guns, one black, and one green, both able to launch missiles. The figures have also two transparent wings on its back, that are able to divide themselves when Steel is pressed.

Retrieved from "https://max-steel-reboot.fandom.com/wiki/Explosive_Wings_Max?oldid=23795"
Community content is available under CC-BY-SA unless otherwise noted.