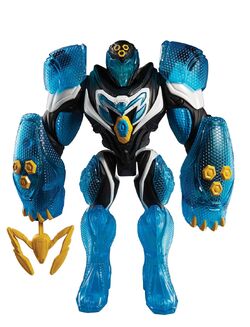 Exo Strength Max Steel is one of the character's action figures based on his Turbo Exo Strength Mode. It was released on the second half of 2015 under the Battle-Tek subline.

Max uses a black helmet with three small hexagons on the forehead, and a blue visor on the face that can be removed to reveal Max's face. The armor is mostly black with white lines on the chest, thighs, and a large part on the shoulders. The figure also have transparent parts, such as the blue shoulder pads, the two gauntlets with three small and yellow heptagons, thigh pads, and the blue boots. The figure has eight points of articulation, and doesn't comes with one accessory.

The figure comes with a removable mask, and a yellow projectile with the shape of Steel, which can be launched through the left gauntlet. When a button located on the right bicep of Max is pressed, the right gauntlet will vibrate.

Retrieved from "https://max-steel-reboot.fandom.com/wiki/Exo_Strength_Max_Steel?oldid=32572"
Community content is available under CC-BY-SA unless otherwise noted.