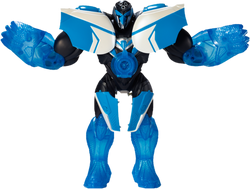 Exo-Tek Max (unofficial name) is an action figure based on Max Steel using Turbo Exo Strength Mode. It was released in 2015 in the second wave of action figures, and is a part of Transform-Tek line.

The figure is mainly features black and blue colours, with some yellow paint application in the head. The figure has four parts in its center, that can be connected to form Steel's head. It is unknown the points of articulation of this figure.

The figure has a blue and transparent piece on the center that when is turned on, the four parts will start to move to later form Steel's head.

Retrieved from "https://max-steel-reboot.fandom.com/wiki/Exo-Tek_Max?oldid=23782"
Community content is available under CC-BY-SA unless otherwise noted.