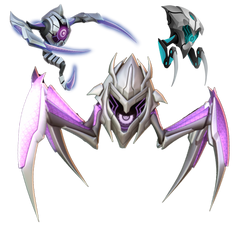 The Evil Ultralinks are Ultralinks members of Makino's armada. In order to assist their leader's conquest mission, they are constantly seeking hosts in order to bond with and turn them into a living weapon. They debuted in Earth Under Siege Part Two.

After Makino bonded with his creator, he started to create more parasitic beings like him, named as Ultralinks, to expand his empire with the same intention as him: to absorb and expand.[1] He also created the Alphalink, a planet-sized device created to devour worlds.

Over the years, Makino and his Ultralinks tore a destructive path throughout the galaxy, annihilating countless civilizations and devouring many worlds for Makino's glory. This led to the creation of the Black Star Council, a society of aliens who managed to survive from Makino and his army, whose main goal consisted in capturing the evil Ultralinks (as well other intergalactic criminals) and bring them to justice.

During the invasion at the Planet Takion, an Ultralink known as Steel betrayed his species by saving the life of one of the inhabitants of the planet, Ja'em Mk'rah.[2] Together they managed to stop Makino's first Ultralink invasion on Earth and on other alien worlds. As a result, the evil Ultralinks developed a deep hatred for Steel due to his betrayal, wanting nothing but to destroy him at any cost for protecting innocent lives.

After the interference of Ja'em and Steel on the first Ultralink invasion, some Ultralinks fled from the battleground, such as the Elementors (specifically Air Elementor, Earth Elementor and Fire Elementor) and an unnamed purple Ultralink. During the period of sixteen years, the Ultralinks remained inactive. Makino would send Ultralinks to Earth, yet N-Tek would capture and contain them.

After the rise of the second Max Steel, the Elementors reappeared and later on a second Ultralink invasion began thanks to Miles Dread's efforts. Makino sent a large fleet of evil Ultralinks, which Max and Steel had difficulty in dealing with, but they managed to defeat them with N-Tek's help.[3] After this setback, Makino remained inactive for few months, of which Max and Steel used to train their powers and skills. During a meteor shower, Makino sent a squadron of four Ultralinks to Miles Dread. The first three became Blast Link, Chomp Link and Prism Link, and the fourth bonded with N-Tek's systems, yet the latter was ultimately captured by Ven-Ghan, one of the members of the Black Star Council.[4]

Afterwards, Makino sends Metallak, one of his most trusted commanders who was responsible for conquering many worlds. He bonded with a pyramid made out of metal and turned into Metal Elementor and became responsible for Makino's army on Earth. However, after failing continously, Makino decides to take matters on his own hands and uses a wormhole to travel to Earth. While an evil Ultralink would bond with Forge, Makino would guide his army to N-Tek's base at Copper Canyon and later on crush Max Steel by himself. He eventually meets Max Steel and captures Steel, later on going to the Makino destroyer orbiting at Earth and prepares the wormhole so the Alphalink could pass through it. However, he is eventually stopped by Max Steel thanks to his new Turbo Rocket Mode. As a result of this fight, many Ultralinks were left at Copper Canyon and were searching for hosts, although they were captured by Max, Steel and Ven-Ghan. Meanwhile, an extremely angry Makino goes to Earth at full speed with the Alphalink and a large armada of evil Ultralinks to destroy earth once and for all.

After Makino finally arrives, he releases his armada on Earth and starts to cause havoc. While N-Tek's army deals with the Ultralinks on the planet, Max and Steel infiltrate the Alphalink to destroy its power source, later on discovering that it was powered by Max's father. On the verge of Makino's defeat, he contacts his Ultralinks to go back to the Alphalink, which later on blows up by inside thanks to the efforts of Max, Steel and Ja'em's T.U.R.B.O. Energy.

Shortly after the Alphalink's destruction and Makino's return, a group of three evil Ultralinks were seen in the competition proposed by Makino, but since they weren't linked with a host, they were relatively weak compared to the other competitors and therefore were mercilessly destroyed.

During the time gap between Maximum Morphos and Team Turbo, N-Tek captured all the remaining Makinian technology and stored it at the Ice Box in low temperature.

The Evil Ultralinks are usually shown to be very quiet, though that some of them are able to talk like Steel (but they refuse to interact with him due to his betrayal). They have an endless thirst for destruction, even more so when they are bonded with something or someone, showing no mercy for other living beings in their way. As seen in Turbolt the Terrible, some of them are very competitive towards others, even willing to hurt others of their species. They blindly follow Makino's orders, while also possessing the same intentions as him: to absorb and expand.

The evil Ultralinks are capable of linking with practically everything, going from inanimate objects to living beings. However, unlike forming a symbiotic bond similar to Max and Steel, they completely take control of the host and turn it into a living weapon designed for mass destruction. By doing so, they enhance the physical capabilities of their hosts, making them stronger, faster and more durable than an average individual.

Like any other Ultralinks, they are susceptible to the Ultralink hunter's weapons, which are capable of undoing the link with ease without damaging the host at all. In humans, their bond can be weakened via emotional impact[5], and once they are removed by from their hosts, the person will slowly lose its memories of when they were being controlled. [6].

Community content is available under CC-BY-SA unless otherwise noted.