The first three Elementors, Fire, Earth and Air, came in the first Ultralink invasion on Earth. Years later, Water came to Earth through his spacecraft, which was broken and he was attempting to go back to his homeplanet, but ultimately failed. Sixteen years later after the first invasion, the fifth Elementor, Metallak was sent to Earth and linked with metal, thus bringing to life Metal Elementor.

Elementors are very large and possess very monstrous features. They have very bulky and muscular body shapes and stand in an upright or hunched over posture. They have large, muscular arms that end with three to five claws on their hands and double-jointed legs that end with two to three claws on their feet. Elementors have sharp teeth in their jaws and most possess an underbite. Their Ultralink/Megalink cores are located in the centre of their heads or foreheads. Some Elementors also have eyes. Elementors also have unique features depending on what element they have linked with.

So far, there are five types of Elementors existing in the show. They consist of fire, earth, water, air and metal. The following list is organised by order of appearance.

Earth Elementors are Ultralinks that have linked with the element of earth. The main Earth Elementor seen in the series isn’t very smart, but what he lacks in intelligence he makes up for in brute strength. He uses his control over earth to hurl boulders at enemies or travel underground with ease. He first appeared in Come Together Part Two. Besides himself, there were also other Earth Elementors seen in the series' past, which mainly were a part of Makino's army in the first invasion of the Ultralinks on Earth.

Water Elementor is an Ultralink that linked with the element of water. Water Elementor is one of the most intelligent of the Elementors and uses his cunning to his advantage. His control over water is powerful as he can generate torrents of water or manipulate tidal waves. He made his first appearance in Hard Water.

Air Elementor is an Ultralink that fused with the element of air. He is extremely powerful and intelligent and was once the leader of his fellow Elementors (until he was usurped by Metal Elementor). His power over the air allows him to move around as a tornado and to generate strong gusts of wind and even manipulate the composition of himself or the air around him. He debuted in Elements of Surprise Part One.

Unlike the other Elementors, Metal Elementor is a Megalink once known as Metalak. He fused with a metal statue to become the most powerful of the Elementors. He was the supreme commander of his master Makino’s forces and was extremely loyal to him. Metal Elementor is ruthless and is a master strategist. He uses his powers to control metal and to manipulate the structure of his body in order to turn into a liquid state or shift his hands into different weapons. He debuted in Full Metal Racket.

Over the course of the series, The Elementors have been seen to be able to combine together into many different forms. The following list is organized by order of appearance. 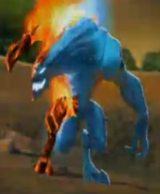 Fusion of Water and Fire Elementors. This combined form has the powers and characteristics from both Fire and Water Elementors and they are able to control both water and fire simultaneously or fuse them together to control steam. This fusion debuted in The Wrath of Makino.

The fusion of Fire, Air and Earth Elementors. Not much is known about their abilities, but they are capable of controlling fire, air and earth and manifests this by launching fire projectiles and fire tornados. They debuted in Team Turbo.

The fusion of Fire and Metal Elementors. This form allows them to control both fire and metal simulteneously and besides they have a spear on their right arm that they use fight their foes. They debuted in Turbo-Warriors.

The fusion of Earth and Water Elementors. This form allows them to control both earth and water elements simulteneously and they also carry a hammer made out of earth, water and Terror Energy. They debuted in Turbo-Warriors.

By the end of Turbo-Warriors, after the Elementors were knocked down by Team Turbo, Metallak decides to permanently absorb them into his being, which causes a drastic change on his size and appearance to change. It debuted in Turbo-Warriors.

The Elementors' powers primarily consist in controling the elements of nature. They have superhuman conditions, such as strength, speed and durability also. Through a device, they are capable of fusing themselves to create a giant creature known as Ultimate Elementor, and through annexing process, this form can be also annexed with Metal Elementor to create Mega-Elementor. However, as seen in The Wrath of Makino, they can also fuse themselves without any kind of device.

They only have one known weak spot: their energy core localized on their foreheads, which, in numerous occasions, were used to defeat them. As seen in Turbo-Warriors, the Elementors' fusion can be undone if their energy core is destroyed. Like other Ultralinks, they can be easily unlinked from their links-slaves through the Ultralink hunters' weapons.

Retrieved from "https://max-steel-reboot.fandom.com/wiki/Elementors?oldid=30314"
Community content is available under CC-BY-SA unless otherwise noted.