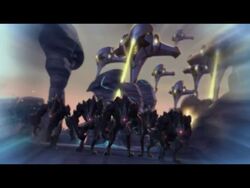 This is the article about the species. You may be looking for the character.

The Earth Elementor Species are a group of Ultralinks that have bonded with earthen materials, including, but not limited to, rocks. These Ultralinks were first seen in the Ultralink Invasion that took place in Tachyon. They were not necessarily originally called "Elementors" but the last surviving of it's kind on Earth eventually became known by the title. The Earth Elementor Species debuts in The Legend of Ja'em Mk'rah.

When Makino and his army of Ultralinks invaded Tachyon, most of the Ultralinks linked with rocks, creating monsters like Earth Elementor.

They appeared on the flashback of Steel's past. There were many Stealth Ultralinks linking with rocks and merging into monsters like Earth Elementor. They eventually were all defeated by Ja'em Mk'rah.

Retrieved from "https://max-steel-reboot.fandom.com/wiki/Earth_Elementor_(Species)?oldid=28803"
Community content is available under CC-BY-SA unless otherwise noted.