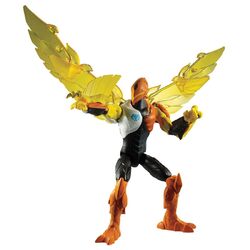 Eagle La Fiera is an action figure based on La Fiera's Turbo Eagle Mode. It was released in 2016 as a part of the second wave of action figures and introduced in both Connect-Tek and Team Turbo Fusion Tek toy lines.

La Fiera has a orange helmet resembling a eagle which has a black lozenge on his forehead and a yellow thin visor. He has a white part on the right part of the chest featuring Team Turbo's logo and a orange part on the left part featuring four rips that goes from his shoulder to his lower chest. He has yellow muscular arms with orange and black forearm pads and yellow gloves. From his upper abdomen to his knees his armor is entirely black, and he has orange boots with feets similar to an actual eagle. He has twelve points of articulation and comes with six accessories.

La Fiera comes with two pairs of yellow transparent wings that can be inserted into any Connect-Tek port on his body. He also has a pair of forearm pads featuring yellow eagle-like claws.

Add a photo to this gallery
Retrieved from "https://max-steel-reboot.fandom.com/wiki/Eagle_La_Fiera?oldid=29317"
Community content is available under CC-BY-SA unless otherwise noted.