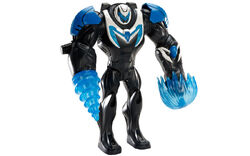 The Latin America version, was bigger and bulky than the USA version, but the gimmicks were still the same. In this version, the predominant color was black, while the figure had white and blue details. The figura comes with one accessory, and have six points of articulation.

The figure is able to spin the drill in the left arm, and in the right arm, is able to launch the blue transparent projectile. Also, when Max's head is pressed, his arms will elevate. 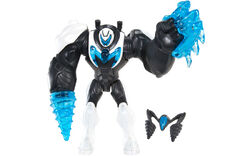 The USA version, is smaller and have more details than the Latin America version. The figure is mostly black, like his Latin America counterpart, and have white details alongside with blue parts on the arms. The figure have seven points of articulation, and comes with two accessories.

Max is able to spin his drill, and launch the spikes of the right arm. Also, he comes with a Steel mini-figure, that can jump when pressed.

Retrieved from "https://max-steel-reboot.fandom.com/wiki/Drill_Strike_Max_Steel?oldid=18059"
Community content is available under CC-BY-SA unless otherwise noted.