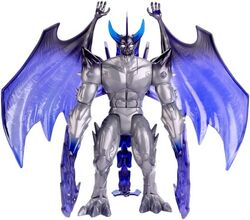 Compared to other figures, Terrorax is slightly bigger, standing around 5cm bigger than them, His body is completely grey with dark grey spikes on his shoulders, legs and its face, which is completely dark grey. He has white eyes, a horn on both sides of his head and on his forehead and his mouth is shaped like if he was always smilling. He has a pair of large, purple bat-like wings with dark purple arms, purple spikes on his back and a segmented tail. He has dark purple axes for both hands and has three toes. He has eleven points of articulation and comes with three accessories.

Terrorax comes with a pair of wings which can be inserted on the mini beast that he comes with, which is completely purple and features a disfigured skull for its face and a segmented tail. Said beast can hide itself on Terrorax's back. He has a pair of levers on his back which can movement his arms. Once something hits the center of his body, the beast will be released, whose wings can clap.

Retrieved from "https://max-steel-reboot.fandom.com/wiki/Dragon_Terrorax?oldid=29692"
Community content is available under CC-BY-SA unless otherwise noted.