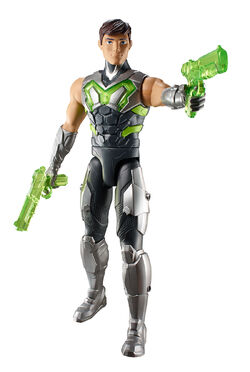 Double Blast Max Steel is one of the character's action figures released in the first half of 2017. He is a part of both Connect-Tek and Turbo Missions sublines.

"Ready for extreme missions and extreme action, this 18-inch Max Steel figure features a Turbo energy-charged design. Multiple points of articulation make him ready to protect the world from extreme villains. And equipped with his two guns, Max is ready for the ultimate double blast action. Includes Max Steel figure and two guns. Colors and decorations may vary."

Max appears wearing his new Turbo Base Mode. He has a V-shaped silver detail on his heck, the green M-shaped logo on his chest with a chestplate around it, green strips on upper torso, grey gauntlets, grey gloves, silver thigh pads and grey boots. He has eight points of articulation and comes with a pair of guns which he can hold with his hands or can be inserted into one of his Connect-Tek ports. He is also taller than other action figures in the line, standing around 18" tall.

Retrieved from "https://max-steel-reboot.fandom.com/wiki/Double_Blast_Max_Steel?oldid=29735"
Community content is available under CC-BY-SA unless otherwise noted.