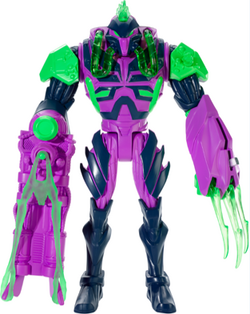 Destroyer Toxzon (unofficial name) is an action figure based on Toxzon. It was released in 2015 on the second wave of action figures, as a part of Battle-Tek line.

Toxzon has light green eyes with dark blue parts on the face. He has two green and transparent hoses that are interconnected on his face to his back. He has dark blue lines and some light green parts on his chest. Toxzon also have green shoulder pads, the two being different from each other. On his left arm, he has a large and very detailed cannon with two green spheres, and on his right arm, he has a purple gauntlet with three large and transparent claws. He also have three dark blue parts on each thighs, and uses dark blue boots. He has six points of articulation, and doens't comes with any projectile.

As previously mentioned, he has a purple cannon that can launch a projectile of a Goopaniod. The purple gauntlet of the right arm can spin through a button on his chest, and through light purple lever, the three claws of Toxzon can be revealed.

Retrieved from "https://max-steel-reboot.fandom.com/wiki/Destroyer_Toxzon?oldid=24507"
Community content is available under CC-BY-SA unless otherwise noted.