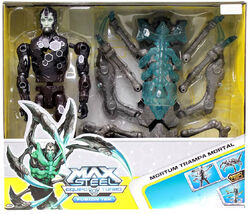 Death Trap Mortum is an action figure based on Professor Mortum as a robot zombie. It was released on 2016, introduced in the second wave of the action figures and is a part of Connect-Tek and Team Turbo Fusion-Tek.

Mortum's armor is completely black with few polygons over his body, predominantly seen on his torso and both arms. His body is completely hollow (like other toys) and there are many holes around his body, reinforcing the idea of him being a zombie. Mortum's face has a greenish tone and only the front part of his face is seen and his helmet has hexagon pattern. He has a deformed silver jaw with many irregular teeths. Some polygons are painted (around ten of them), which represent the Connect-Tek infused with Mortum. He possesses twelve points of articulation and comes with one accessory.

Mortum comes with a completely articulated and massive armor which resembles a centipede, scorpion or an arachnid animal. The armor have transparent parts in the front which are similar to bones. It possesses many arms with transparent claws on the tips and supports capable of handling other arms or weapons. Mortum's limbs are also removable to insert his torso on the armor to create different possibilities of transformations, between those: Arachnid Mode (most of Mortum's limbs are removed, leaving only the legs and and the monster arms, gaining an arachnid appearance), Scorpion Mode (the end of Mortum's armor can be lifted up, resembling a scorpion, with the back of the armor resembling the face of an actual scorpion), Death Trap Mode (featured on the illustration of the box; only Mortum's torso is inserted on the armor, resembling a trap), Hybrid Mode (only Mortum's torso is inserted on the end of the arachnid / centipede body and all other arms are inserted on his body, resembling a hybrid of a human and a arachnid) and Multi-Attack Mode (only the transparent part and supports are kept from Mortum's armor and his arms are switched to blades).

Box of the international release

Add a photo to this gallery
Retrieved from "https://max-steel-reboot.fandom.com/wiki/Death_Trap_Mortum?oldid=29571"
Community content is available under CC-BY-SA unless otherwise noted.