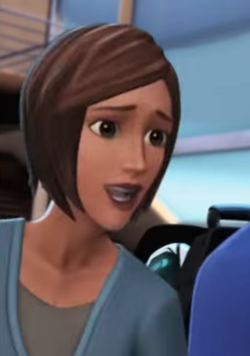 Cute Girl [1] is an unnamed minor character in Max Steel. She debuted on Secret Identity Crisis  and is voiced by Kathleen Barr.

She made her debut when asking for Butch an autograph, referring to him as "Mr. Butch".

She was later seen in the bus alongside with other students and was saved by Kirby Kowalski when the bus was about to fall on the canyon. Later, she appears saying to Butch that she didn't his autograph anymore and that she would asks for Kirby's.

She is a student with tan skin, short dark brown hair and brown eyes. She wears a grey shirt over a blue blouse, brown pants and black shoes.

Retrieved from "https://max-steel-reboot.fandom.com/wiki/Cute_Girl?oldid=28921"
Community content is available under CC-BY-SA unless otherwise noted.