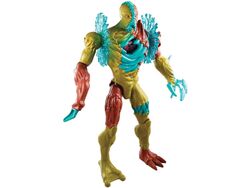 Core Heat Morphos is an action figure based on Morphos. It was released in 2015 in the first wave of action figures, and is a part of Battle-Tek line.

Morphos is using his main mode and has remarkable differences compared ot his animated counterpart, such as the irregular body. He has red eyes, a vertical line made out of crystals and only one left ear. He has a giant cavity on the center of his chest surrounded by blue crystals that goes from his upper torso to the lower abdomen. The left side of his chest is maroon and has three spikes protuding from it. He has a hook on his right arm and transparent, light blue claws on his left arm. His torso and arms also have light blue circles between them. His left thigh has a blue crystals and he has a right webbed-foot and a left foot with three clawed toes.

When Morphos' both legs are pressed together, the circles on his shoulders and the heat on his cavity will spin, hence the name "Core Heat". He also has a spring-loaded claw on his right arm.

Retrieved from "https://max-steel-reboot.fandom.com/wiki/Core_Heat_Morphos?oldid=26939"
Community content is available under CC-BY-SA unless otherwise noted.