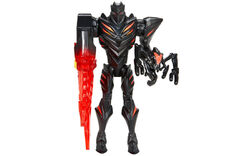 Claw Blast Dredd is one of Miles Dread's action figures. It was released in the first half of 2014 as a part of the 6 inch toy line.

Miles Dread's armor is the same has that of his main mode from the show. It is mostly black and has angular shapes all aroudn the armor. He has red eyes, red/orange accents on his chest, red details on the shoulder pads and shins. Unlike his animated counterpart however, he has a giant, red crab-like claw cannon on his left arm. He has ten points of articulation and comes with two accessories.

The figure comes with an Ultralink, which can be inserted onto the figure's arm or either can be used as a ring. When Dread's pushed down, his left arm goes up, allowing him to shoot the projectile.

Retrieved from "https://max-steel-reboot.fandom.com/wiki/Claw_Blast_Dredd?oldid=29845"
Community content is available under CC-BY-SA unless otherwise noted.