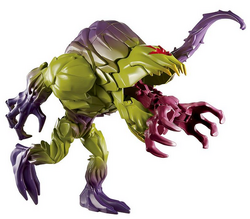 Capture Claw Chomp Link is one of the character's action figures. It was released on the second half of 2014 and belonged to the Aerial Invasion subline.

Chomp stands on a hunched posture and its body is mostly green, having purple accents on his column, hand, whip, abdomen and feet. He also has yellow accent on the tip of his "teeth" and has a red sphere with four "legs" sticking out from it, representing his Ultralink. He has four points of articulation and comes with one accessory.

Chomp's main gimmick mechanism consists in moving his left arm to open his mouth and reveal a large monstrous capture claw that opens and closes to capture a target. The figure comes with a small Steel target and Chomp's whip is stretchable.

Retrieved from "https://max-steel-reboot.fandom.com/wiki/Capture_Claw_Chomp_Link?oldid=30003"
Community content is available under CC-BY-SA unless otherwise noted.