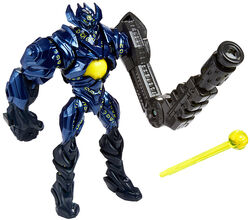 Cannon Blaster Makino is an action figure based on Makino using Main Mode. It was released in 2014, as a part of an unknown line.

The figure represents Makino exactly how he was seen in the show, with the exception of the giant black cannon in the right arm, which wasn't seen in the show. The figure has nine points of articulation, and comes with one projectile.

With the cannon in the right arm, Makino can launch the projectile, with the sculpture of an Ultralink Sphere. When it is about to launch, a button is pressed, which will make the cannon expand.

Retrieved from "https://max-steel-reboot.fandom.com/wiki/Cannon_Blaster_Makino?oldid=19694"
Community content is available under CC-BY-SA unless otherwise noted.