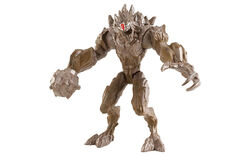 Boulder Smash Elementor is one of Earth Elementor's action figures. It was released in 2013 and is a part of Strength line.

The figure is completely brown and has almost the exact same appearance as Earth Elementor in the shw. He has silver eyes and an Stealth Ultralink painted on the forehead region. His shoulders and back have many crowded pointy rocks and the rest of his body has a rocky aspect. He has a weapon similar to wrecking ball on his right arm, he has only three fingers and two toes. He has five points of articulation and does not come with any accessory.

He has a wrecking ball on his right arm which can move and he has a button on his back that allows Elementor to do smashing movements.

Retrieved from "https://max-steel-reboot.fandom.com/wiki/Boulder_Smash_Elementor?oldid=27619"
Community content is available under CC-BY-SA unless otherwise noted.