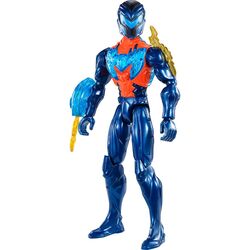 Blaze Assault Max is an action figure based on Max Steel, barely based on Turbo Base Mode. It was released in 2015 in the first wave of action figures, and is a part of Transform-Tek line.

In this figure, Max is basically using a dark blue armor with light blue chest (when not transformed), and has a flame in his arm. The figure comes with a one accessory and one projectile.

The figure comes with one small blue cannon, that is able to launch one yellow projectile. The figure is also transformable: in the normal form, the chest of him is light blue, and when transformed, is orange and Steel turns more visible.

Retrieved from "https://max-steel-reboot.fandom.com/wiki/Blaze_Assault_Max?oldid=23626"
Community content is available under CC-BY-SA unless otherwise noted.