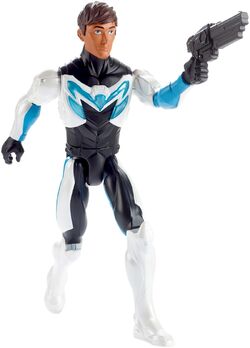 Blaster Max is an action figure based on Max Steel using Turbo Base Mode. It was released on 2016 on the first wave of action figures, and is a part of Max Steel: Team Turbo.

"Max surprises Elementor incredibly using his launcher, while he strikes with an attack of flames!"

Max Steel's face is fully visible on this toy, but instead of the previous releases, his face has older features. He has white paint job on the chest and legs, while the rest of the body is made on black or white plastic. Unlike other figures on the line, Max have Steel linked on his chest. He has nine points of articulation, and doesn't comes with any accessory.

Max has a small black gun attached to his right hand, which is not removable.

Retrieved from "https://max-steel-reboot.fandom.com/wiki/Blaster_Max?oldid=24787"
Community content is available under CC-BY-SA unless otherwise noted.