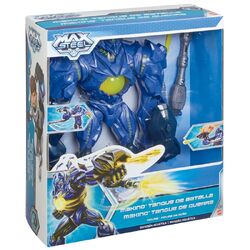 Battle Tank Makino is an action figure based on Makino in his main mode. It was released in 2014 in the second wave of action figures, and is a part of Aqua Invasion line.

Makino presents the same characteristics as seen in the series. His head is covered by a blue helmet, he has yellow eyes and a sphere on the center of his forehead. His armor is completely blue with yellow letters in his neck, arms and thighs and he has a large yellow sphere on his chest. He has a dark blue missile launcher in his right arm. Makino has nine points of articulation and comes with one accessory.

He comes with a grey cannon that needs to be assembled and a yellow missile. Makino has a button on his right shoulder, which after pressed, the two cannons will elevate at the same time.

Retrieved from "https://max-steel-reboot.fandom.com/wiki/Battle_Tank_Makino?oldid=28846"
Community content is available under CC-BY-SA unless otherwise noted.