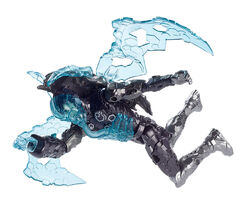 Bat Mortum is one of Mortum's action figures released in 2017. It was introduced in the first wave of action figures and is a part of both Connect-Tek and Turbo Missions sublines.

"Beware of this alien menace! Death Wing Mortem is ultra threatening in 12” deluxe size, with massive grey wings, claws, stingers and 6 lethal appendages. His weaponry and limbs attach via ConnectTek ports so you can interchange parts with other ConnectTek figures and vehicles for even more battle options. And that’s not all, Mortem transforms into a bat to quickly fly out of range, zero in on his target and fire a projectile. But watch out Mortem, Mountain Combat Max has pick axes to hurl and rip your wings and face mask off! Who will reign victorious teen hero Max Steel™ or Death Wing Mortem? Mountain Combat Max sold separately, subject to availability."

Mortum wears a black helmet that covers most of his head, with the exception of his face. He has green skin, black eyes with white pupils, black circles around his eyes and a deformed metallic jaw with visible teeths. With the exception of his hands and boots, Mortum's body is entirely black and made out of black poligons, with some of them having silver edges. His right arm also has a launcher with a hook-like projectile. He has eleven points of articulation and comes with three accessories.

Mortum comes with a transparent skull-shaped blue mask with a hose connected to his abdomen. He comes with a pair of blue wings with holes on it that can be inserted into a "backpack" that attaches to Mortum's back and allows him to flap his wing upon a switch on his back is pressed. The sculpture of the item also resembles a skull and has a spike protuding from its back and shoulders. Mortum also comes with a hook-like projectile, which can be launched by his cannon on the left arm.

Retrieved from "https://max-steel-reboot.fandom.com/wiki/Bat_Mortum?oldid=29622"
Community content is available under CC-BY-SA unless otherwise noted.