You may be looking for La Fiera's Turbo Base Mode. 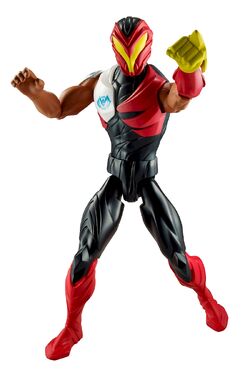 Base Mode La Fiera is an action figure based on the character with same name. It was released on the first half of 2016 and belongs to the Team Turbo sub line.

La Fiera has a red and black helmet with a yellow visor with the shape of the letter "V". He uses a black sleveless suit with three red rips on the left side of his chest and the Team Turbo logo, featured by a small white part with a blue logo with a hexagonal shape. Thre rest of his suit have many details with the shape of rips. He has a silver shoulder pad and a red and yellow gauntlet in his right forearm. He also has red boots. La Fiera has twelve points of articulation and doesn't comes with any accessory.

Add a photo to this gallery
Retrieved from "https://max-steel-reboot.fandom.com/wiki/Base_Mode_La_Fiera?oldid=30974"
Community content is available under CC-BY-SA unless otherwise noted.