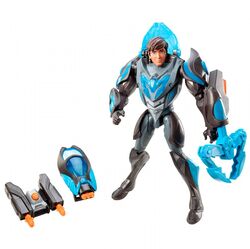 Armor Claw Max is an action figure based on Max Steel. It was released in 2013 and is a part of Stealth line.

In this armor Max Steel is using an armor which contains neutral colours, like black, grey, silver, blue, and orange. It has a bulky appearence in the torso, but overall, the figure is similiar to other figures of Max Steel. It has twelve points of articulation, and comes with two accessories, and three projectiles.

Retrieved from "https://max-steel-reboot.fandom.com/wiki/Armor_Claw_Max?oldid=19658"
Community content is available under CC-BY-SA unless otherwise noted.