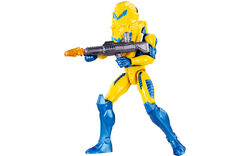 Armor Attack Max is an action figure based on Max Steel. It was released in 2015 in the first wave of action figures, and is a part of Transform-Tek.

In this figure, Max Steel is using an armor which is mostly yellow with blue parts. The figure has twelve points of articulation, and comes with one accessory and one projectile.

The accessory, is a grey gun that can be inserted into both hands of Max, and can launch one projectile. Also, Max has a yellow part in the torso that is a part of it, which can be flipped up, to reveal Max's face.

Retrieved from "https://max-steel-reboot.fandom.com/wiki/Armor_Attack_Max?oldid=19300"
Community content is available under CC-BY-SA unless otherwise noted.