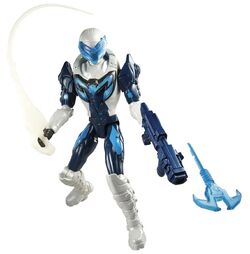 Arctic Storm Max is an action figure based on Max Steel. It was released in 2015 on the first wave of action figures, and is a part of Battle-Tek line.

Max is using a white helmet with a blue visor, which can be removed to show Max's face. He uses white and dark blue armor, which has light blue paint jobs on the biceps and legs. The boots are also seemingly larger compared to the other boots of other extreme figures of Max Steel. It has nine points of articulation, and comes with two accessories.

Retrieved from "https://max-steel-reboot.fandom.com/wiki/Arctic_Storm_Max?oldid=28733"
Community content is available under CC-BY-SA unless otherwise noted.