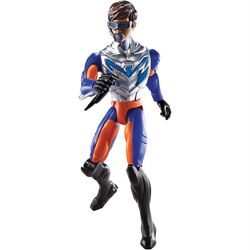 Aqua Velocity Max is an basic action figure based on Max Steel. It was released in 2013 and is a part of Speed line.

The armor of Max in this toy is mostly blue, but it have orange and black details on it, and Max's torso is silver. Also, Max uses a mask in this figure. It have standard articulation (12 points of movement), and have a knife on Max's hands.

The figure, is very basic and does not have one gimmick, it only have one knife that is stuck on Max's hands; it is a part of the sculpture.

Retrieved from "https://max-steel-reboot.fandom.com/wiki/Aqua_Velocity_Max?oldid=30369"
Community content is available under CC-BY-SA unless otherwise noted.