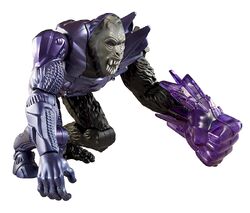 Ape Extroyer is an action figure based on the transformation with the same name. The figure was released on 2016 and is a part of Max Steel: Team Turbo.

"La Fiera uses his animal instincts and his powerful fists to fight against Extroyer while he transforms into a horriyng gorilla!"

Extroyer has a grey face with white eyes and yellow teeths. Half of his body has his main mode while the other half represents his gorilla mode, which can be mainly noted on his right arm and leg. His gorilla arm is seemingly larger than his normal arm, and his hand is covered with purple crystals. He has 10 points of articulation, and doesn't comes with any accessory.

When his gorilla arm is moved, his face will switch to the face of a mutant gorilla. His gorilla arm also counts with attack action.

Retrieved from "https://max-steel-reboot.fandom.com/wiki/Ape_Extroyer?oldid=24786"
Community content is available under CC-BY-SA unless otherwise noted.