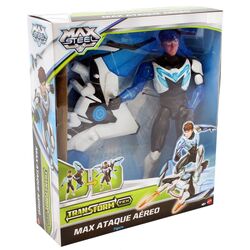 Max wears a full-body armor resembling his Turbo Base Mode. The armor is mostly black, but it has white parts on the chest, where Steel is located, shoulders, biceps and shins. His right arm is transparent blue and he has black hands, and his left forearm is transparent blue. He has twelve points of articulation and comes with one vehicle and a pair of missiles.

Max comes with a hovercraft which is shaped after Steel. The vehicle has missile shooting feature and has a two pegs on its top, allowing Max to be connected to it. It has two forms: battle form and flight form. The first is when it is connected to Max's forearm, thus resembling a weapon, and the second is when it is inserted onto Max's back.

Retrieved from "https://max-steel-reboot.fandom.com/wiki/Aerial_Attack_Max_Steel?oldid=29254"
Community content is available under CC-BY-SA unless otherwise noted.