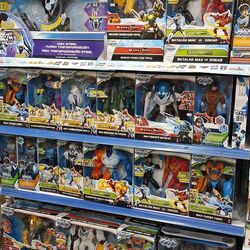 The action figures are poseable figures based on the characters and vehicles of the Max Steel series which have been produced since 2013 by Mattel. The initial toy line from Latin America was completely different from the releases of North America and worldwide, being larger and containing more articulation points and gimmicks.

During the first three years, the toy line was divided into three sublines, but after 2016, it was shortened to only one subline which was Connect-Tek and other few based on the series' films. As of 2018, the toy line is no longer divided into any subline and the number of the toys reduced drastically, having eighteen toys when there is usually more than forty models.

Initially the toy line was divided on three different sublines which were released on two waves, each containing around twenty toys. The first wave often presents more Max figures rather than other characters. The second wave usually introduces a new character that recently debuted on the show and new modes for Max.

The first wave hit the shelves on the beginning of the year, while the second often hit on June, but in rare occasions they come sooner.

The first three sublines' themes were based around Max's Turbo Strength, Turbo Speed and Turbo Stealth modes. The Rise of Elementor toy line was a limited release which was based around the game with the same name.

The second year of the toy line was based around the Ultralink invasion, a major event of the second season.

In its fourth year, the subline Connect-Tek was kept and there were other two sublines based around the 2016 movies. There were few toys whose characters or modes didn't appeared on the movies which weren't classified into any subline. A small subline based around the live action adaptation of the series was made and contained a total of three action figures which reused molds from the animated series' toy line.

In its fifth year, the toy line's appearance changed to match Max Steel's new Green T.U.R.B.O. Energy, gaining a new logo and packages featuring green. The sublines were divided onto four sublines, wherein three of them (Turbo-Charged, Turbo-Warriors and Connect-Tek) were based on the series' films and one (Turbo Missions) containing characters and armors for Max that were made exclusively for the toy line.

In both 2018 and 2019, most of the figures are listed under the name of the Connect-Tek subline, saving for few 6" action figures.

Characters Introduced In the Toy Line

The following list contains all the characters introduced in the toy line. 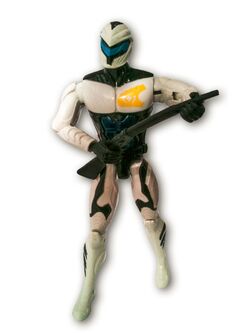 Several fake figures were released by other manufacturers that weren't authorized by Mattel. Consequently, the figures are notably cheaper and poorly made, and they doesn't have the same articulation as the original version. They are usually sold in small shops.

Retrieved from "https://max-steel-reboot.fandom.com/wiki/Action_Figures?oldid=30328"
Community content is available under CC-BY-SA unless otherwise noted.