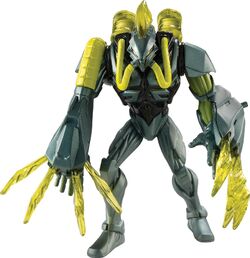 The unnamed 6 inch line was the first toy line based on the new series of Max Steel released on USA and other places of the world. The first models were shown in a toy fair in 2013 and the first collection was released in Fall 2013.

In Fall 2013, Mattel released the first wave of the 6 inch action figures. The line was divided in two: basic, which included LED lights and few points of articulation and deluxe, which had more gimmicks and usually came with a DVD. There were no new releases for the rest of the year.

In early 2014, Mattel released new action figures based on the upcoming Ultralink invasion of the second season. The toys, unlike the previous releases, had more articulated points and paint applications. The line included characters both of the first and second seasons and they came with one Ultralink, which could be inserted somewhere in the action figure or serve as a ring. There was also a toy fair in February 2014 that showcased the future releases of the line, which featured action figures for Chomp and Ven-Ghan.

In the mid of the same year, Mattel released new figures, but these didn't included any gimmick, but in exchange they were more detailed, this time coming with more accessories and having more articulated points. The company also released 12" figures, most of them being taken from the Latin American toy line. There were plans of continuing the line by introducing more characters, such as Ven-Ghan, Metal Elementor and Toxzon, but the line was cancelled by unknown reasons, presumably due to the lack of sales. Nonetheless, a part of the line was released, being only Chomp Link and Earth Elementor.

In early 2015, few 6" toys leaked on the internet, but none of them were released. Known products were the Ultra Turbo Battlers and new 6" vehicles with a figure, being those a Turbo Cycle and a Turbo Car.

Retrieved from "https://max-steel-reboot.fandom.com/wiki/6_Inch_Toy_Line?oldid=29916"
Community content is available under CC-BY-SA unless otherwise noted.